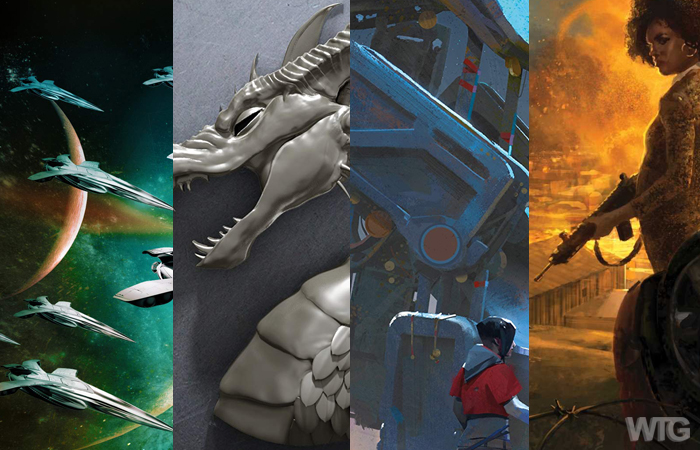 Because 2019 really has been that good a year for new science fiction and fantasy, we’re (wtg) providing even more incredible must read books.

Daniel Abraham and Ty Franck—the brains behind the James S.A. Corey pseudonym—have a lot going on, not the least of which is serving as producers of the fantastic streaming series based on their space opera/political soap opera saga The Expanse (of which Tiamat’s Wrath is a part), so you’d be forgiven for thinking they might have let something slip with the penultimate volume of their nine-book magnum opus. But no: It might be the best one yet.

A Boy and His Dog at the End of the World, by C.A. Fletcher

The title kind of says it all, doesn’t it? We live in anxious times, and apocalyptic visions are a dime a dozen. C.A. Fletcher’s stands apart for its singular focus on the title characters: a young boy journeying a blasted landscape with his canine friend, in desperate pursuit of the man who stole away with his other pup. You just don’t separate a boy from his dog, apocalypse be damned.

Take a Look: A Boy and His Dog at the End of the World

The Record Keeper, by Agnes Gomillion

The worldbuilding in this apocalyptic afrofuturist debut is fascinating and stark: In a ruined future America, the dark-skinned Kongoese are kept in servitude to the ruling white class, forced to take a pill that causes them to forget their own pasts. Arika is a Kongoese Record Keeper, living more comfortably but trained to pen false histories to replace those erased ones—which is some kind of metaphor for America’s long (and ongoing) struggles with racism, injustice, and inequality.

Take a Look: The Record Keeper

The Ruin of Kings, by Jenn Lyons

Jenn Lyons debut entered 2019 as one of the year’s buzziest books, and it mostly lived up to the hype—a fantasy bildungsroman telling of the strange trip that brought a very particular prisoner to his cell, and of the jailer listening to the story play out, it has worldbuilding to spare (a good thing, considering the first of four planned sequels arrives before the end of the year). Plus, there are intriguing footnotes.

Take a Look: The Ruin of Kings

The sequel to Gareth L. Powell’s British Science Fiction Award-winning Embers of War does everything right, crafting an adventure for its crew of ragtag, haunted heroes that is bigger and more mysterious than that which came before. But most of all, it gives us more of the sentient ships at the center of the story, including the Trouble Dog, an ex-warship with something to atone for.

Take a Look: Fleet of Knives

In telling the story of a young woman eking out a meager living—and then leading a rebellion—on an island choked with toxic electronic trash, the latest work of Chinese science fiction to come to America by virtue of the work of translator Ken Liu delivers on a premise with an immediacy that makes it a difficult read—or would, if it weren’t so darkly compelling.

Storm of Locusts, by Rebecca Roanhorse

Trail of Lightning, the first Hugo- and Nebula-nominated book in the Sixth World series, shocked urban fantasy back to life with a story set in a post-apocalyptic America consumed by rising waters and haunted by the monsters of Indigenous American legend, with a fiery, flawed, deeply angry, and totally badass protagonist at its center. The sequel proves Maggie Hoskie’s first adventure was no fluke, and solidifies Roanhorse’s status as the next genre superstar.

Take a Look: Storm of Locusts

Today I Am Carey, by Martin L. Shoemaker

Martin L. Shoemaker’s debut novel expands on an award-winning short story that revisits familiar tropes of an artificial mind’s awakening to the world and gives them an entirely fresh, emotional, and utterly human dimension. This is science fiction at its most achingly sad and genuinely heartfelt.

Take a Look: Today I am Carey

This fantasy twist on Chinatown subs in for Los Angeles’s waning water stores the similarly in-short-supply essence of an imprisoned god, and the Chinese-American tensions with a brewing unrest between humans and a race of aliens. A noir pastiche this pastiche-y has no right to work so well, or be so frickin’ entertaining.

This is an extension of our article the Best Science Fiction and Fantasy Books 2019.